To truly understand the power of the internet, one must know the story of Dogecoin. Once one of the funniest memes on the internet, it transformed into one of the top digital currencies without breaking a sweat. Dogecoin is known today for its high volume of transactions and one of the “friendliest development teams” in the crypto sector. Let’s dig deep into the history of the coin and the meme that inspired its creation.

What Was the Doge Meme?

Around 2013, a new meme of a Shiba Inu dog started appearing on different websites according to the Blokt Dogecoin Guide. The picture of the elegant dog was taken in 2010, and the meme later came with beautiful expressions and colorful broken English text in Comic Sans. In the year of its first appearance, Doge was also named as the top meme of the year by Know Your Meme.

In most cases, the text uses any of the five modifiers- “so,” “many,” “such,” “much” and “very.” It was common for users to write sentences like “such respect” and “much wow” on the meme referring to any particular life situation.

In August of 2013, the meme spammed the r/MURICA subreddit (on Reddit). Soon, it became a popular item on sites like 4chan, Reddit and meme website 9gag. In the same year, MTV listed it on no.12 for “50 Things Pop Culture Had Us Giving Thanks For.” The popularity of the meme kept rising by leaps and bounds over the years, as it became a lasting viral phenomenon on the internet. Even the US Congress used it in December in some of their material.

Doge’s Use in Many Forms

Doge meme became the inspiration for Dogecoin in December 2013. The new cryptocurrency was able to sustain its popularity in 2014. Dogecoin became a subject matter of crypto-based discussions and was also being accepted at many new places.

However, one of the biggest early marketing pushes for the Dogecoin community was when there was news about Dogecoin community sponsoring John Wise in his NASCAR outing with a Shiba Inu picture on his vehicle. The car was also featured in the downloadable content of NASCAR ’14 video game.

In early 2014, two web developers from Sydney contributed to the popularity of the meme as they created a new weather website and mobile app called Doge Weather. The service included the meme’s unique style to narrate weather details.

DDB Stockholm, an advertising agency, used the Doge meme in their campaign for the Swedish transport company SL. It used the pictures of the Shiba Inu holding transport tickets in its mouth and features phrases like “many summer” and “such cheap.” In 2015, Delta Air Lines used Doge in a safety video as well. In the same year, the world “Doge” was added to Dictionary.com.

Weird Al Yankovic used the meme in his song “Word Crimes” as well. In video games, the meme was referred to in The Legend of Zelda: Tri-Force Heroes. In 2016, Mozilla incorporates the meme into its Servo project logo.

Since Doge is a popular digital currency and has a thriving following on platforms like Reddit and Twitter, the Doge memes are available on these platforms. Most users prefer to use the meme to convert a message to the users.

Some of the most common memes in the community talk about Dogecoin “going to the moon.”  Many new Doge memes are available as GIFs as well. 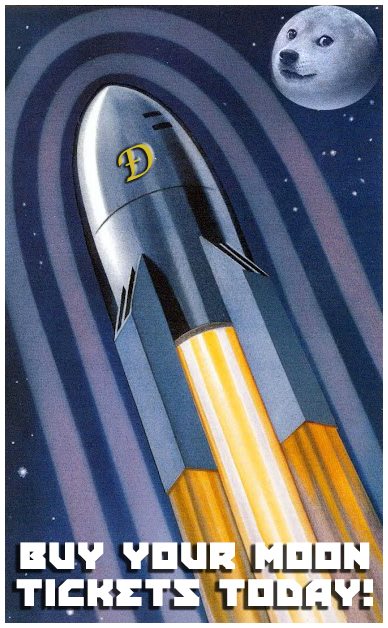 This is quite common with Doge GIF makers. The community likes to call themselves Shibe and has produced many starting memes for both crypto and non-crypto references. For crypto users, the “Earth is a Dogecoin” memes make the most sense.

The infinity Doge memes are one of the most adorable ones out there. It features the Shiba Inu in an infinite GIF loop. If you are a Doge fan, it will be difficult to take your eyes off this meme. Now, as space is evolving, the head of the Shiba Inu is now posted on different entities and objects to give them a funny twist.

Another meme on 9gag received much love from the crypto community. It featured three “miner” Shiba Inus, and the caption read:

“F*ck Bitcoin, this is the only currency I trust.”

Drake’s Hotline Bling meme was also adopted into the Doge tribe as it was used to suggest that DOGE is better than BTC.

The angry Shibe meme also found its way to 9gag. On several occasions, Dogecoin memes are directed at Bitcoin holders, calling DOGE a better cryptocurrency. Some users have also asked for DOGE to become cryptocurrency of 9gag.

This site uses Akismet to reduce spam. Learn how your comment data is processed.

Benjamin Johnson - November 6, 2019
0
The social media wars may have gone cold, but Twitter CEO Jack Dorsey wouldn’t resist a chance to pick on Facebook if he gets...

Bakkt May Launch the First Regulated Options Contract on Its Bitcoin...

Chinese Global Cryptocurrency May Be Just Around the Corner